Get Yours on Gifted Vision 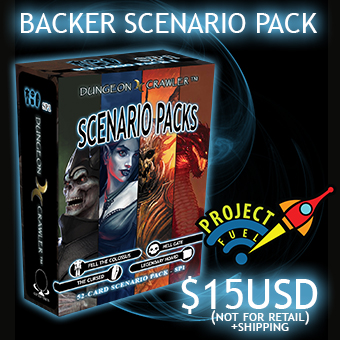 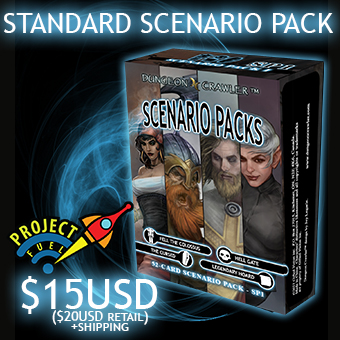 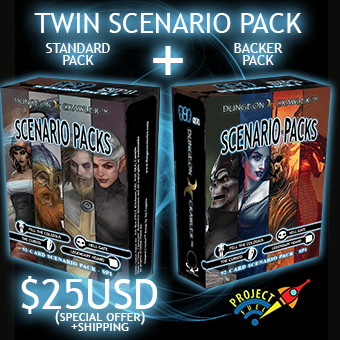 Both scenario packs at a discount. $25USD
30 Backers! 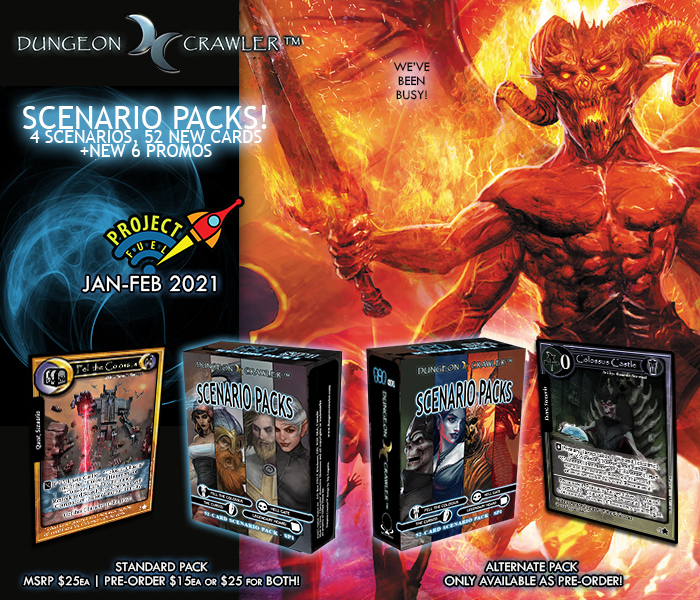 Existing Pledges: If you’ve pledged before January 1st, 2021,
we request that you make a new pledge.

Scenario Packs for our Dungeon Crawler™ ECG will launch on Project-Fuel January 2021, and run until the end of February 2021.  Our first goal is $500, at which point we’ll be giving SIX bonus Promos.  Then when we reach $1250 we will be increasing that to TWELVE bonus Promos.

Both versions of the Scenario Packs include all 4 Scenarios (52 cards total) of incredibly difficult challenges. Our Standard Pack tuckbox will feature our Heroes on the tuckbox, while our Project-Fuel Backer Pack exclusive tuckbox will feature our Villains of the set. Each will be identical in function, but the Project-Fuel deck will be marked to signify that they are for the collector’s edition (while still being playable).

What ARE the Scenarios?

The Scenario Packs are 4 distinct and specific Events-based adventures of epic difficulty and challenge for the players.  Not for the faint of heart.  The Events can not really be used in a Standard game as they are very specific.  Standard cards from your Delve or Expansion Packs are used to build the Dungeon decks and then the 10 Event and 1 Character from ONE Scenario are mixed with those cards to form the 60 card deck.

Fell the Colossus is a brutal challenge to destroy one of the rare Dreadlander Colossus constructs as it rumbles its way across the land.  Billowing a cloud of smoke, it strides towards its intended target to deploy the army it holds within, to wreck havoc with its own powerful weapons, or even it’s bare metal hands!  To get in you must climb the legs, run up along the arms, or fight through the horde in its chest when it opens to ascend to the castle and defeat its pilot: a Doom Caster!

Hell Gate uncovers an evil cult within your own lands that seek to unleash a true horror from beyond!  Will it be Abaddon, or another demon prince?  There’s no time to waste as you unmask their hidden members, seek out their lair and eventually break into their inner sanctum to put a stop to their evil plans!  It’s going to be an epic challenge as Dread Lord Vorlaat has come down from his tower at the Black Wall.

The Cursed tells of a land haunted by a horror, where the very members of someone’s household may have become an infected terror that plagues the people.  Locking themselves in, they pray for salvation, as the night brings unholy terror.  The Vampiress features in this scenario, and she won’t go easily as you face her Brood, discover her identity, and unravel her final resting place where she hangs between worlds.

Legendary Hoard is more of what you might expect from a typical adventure; find the map, get to the location, enter it’s foul trap-laden tunnels, and find the treasure… however, this one is guarded by an Ancient Ruby Dragon!  Nothing will be easy about this battle as the dragon introduces the new Attribute “Titan” outlined on the new Rule card card included in the box!

Who ARE these Heroes?!

A new feature of the Adventurers in the Scenario Packs is that they each have a special ability which can be used in the game as the player chooses.  Although these Heroes are assigned to particular Scenarios, there is nothing stopping the players from using them with any of the Scenarios or in Standard game play.  We selected the heroes in our Scenario Pack to be the heroes from our Web Comic, Dungeon Crawler™ Adventures!  You can read the first volume here https://dungeoncrawler.com

Inga is a Lumarii wizard, her people have traveled the lands and are now stuck on the northern side of Aerymohr in Keldorna this side of the Black Wall and unable to return.  She is adventurous, brave, smart and level headed.  Inga has a special bond with the cursed as an encounter with one of their ilk left her dead, so she has been placed in the Cursed scenario.  Inga’s special ability is to gain Ranged when needed.

Krag is a Gold Dwarf fighter from Stonehold.  Although brave, stalwart and loyal, he’s not super smart or lucky, but for an ale he’ll listen to what you have to say.  He loves the challenge of the fight and will always be by your side.  Krag’s strength and resilience are his greatest assets, and his task has been set to Fell the Colossus.  His special ability in this game is Rampage , which allows him to deliver 2 Wounds in Melee.

Kamber is a Keldornan Priest originally from Keldorna, but who has been trapped south of the Black Wall in the Hilands until recently rescued by Inga and her friends.  He is kind, thoughtful, and respectful, with Kamber nearby there’s no need to worry about the darkness.  Kamber’s devotion to the Light puts him directly at odds against the Darkness, and so he is the perfect candidate to ferret out the infernal plot of the Hell Gate Scenario.  Kamber’s special ability is to deal supernatural damage when needed.

Faera is a Fire Elf Thief from the Fae empire of Faerahn on the northeast side of Aerymohr.  She is adventurous, doesn’t back down, spirited, and tough. Faera’s love of finding more loot has gotten her into a few binds in the past, and this time she’s looking for the Legendary Hoard, so she may have bitten off more than she can chew.  Her special ability in this game is Stealth allowing her to take advantage of certain Terrain or Crawler cards.

More to come (on Promos)!

We made our first goal within 24hrs!  Thank you all.  Now each pack will include Promos!

Backer Pack will now include:

Lesser Abomination is a creepy Poison inflicting monstrosity.  It prefers the water, but can make its way around anywhere.  All Abominations have Unnerve as their uncanny valley appearance of what they were made from makes them into the twisted near human forms.

Medial Abomination is a fire breathing tank, and with Stealth at Cost 3, it’s going to be tricky to get in close to deliver the Wounds necessary to take it down.

Greater Abomination can really deliver the damage each round as it starts with 10 Power each time it Retaliates, and it’s going to sap your Hand to make that damage stick with Regenerate 2.  Shaken 3 will make it a hated adversary everytime it shows it’s creepy tentacles on the battlefield.

Standard Pack will now include:

Dread Lady Ashvarii is one of the Dread Lords that made her way from the southern Dreadlands, and did not stop in the City of Shadows.  Her obsession with getting her own lab set up in her own tower kept her moving.  She is the main cause of the terrors that plague the Black Wall, as the Abominations are her creations!  As you can see she fits into both the Fell the Colossus (as she is a Commander, Caster) and Hells Gate (as she is Unique) Scenarios based on the icons in the upper right corner of her card.

Nospheratu in Dungeon Crawler™ are the apex Vampires, incredibly powerful creatures that have Damned themselves by refusing Salvation.  In some respects, they are less in control than typical Vampires as they can no longer appear human/mortal at all, towering over their previous forms, and their hunger comes far more frequently and with much more drive.  The Nospheratu can fit into both the Cursed (Damned) and the Legendary Hoard (Titan) Scenarios based on the icons in the upper right corner of his card.

Minor Abomination is included to ensure that everyone has at least 1 copy of this long time Promo card (from Unbound!) as not everyone may have been able to collect it.

Both packs will include the new rules card (sides A and B shown below):

Titan deals just as much damage to Characters as it does to Adventurers, but this will create a very apparent Time Limit on the Encounter as the Attributed Titan crushes everything around it.

Attribute: Limited [][] is for the new Named Adventurers, allowing them to use their Attributes a limited number of times during a Match.

Now, let’s see if we can reach our second goal for more Promo copies per Pack!